My Experience with Saudi Arabia 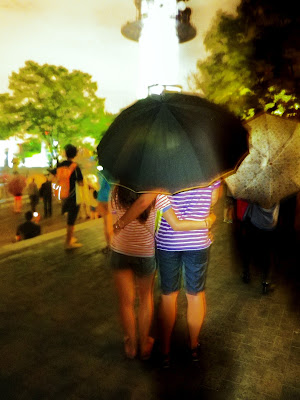 Relationships can be truly amazing <3
I've been there. I understand. How it feels when someone loves you back :)
It's a great feeling.
What about when that feeling fades and you are left with something complex, explainable and damaging?
Here is my story...

I feel honestly, like the stupidest woman in the word.
I dated a man from the Middle East.
How stupid can one be?

Not just the Middle East, but specifically Saudi Arabia.
What the hell was I thinking?

Now, lets not get judgmental here. I'm  not saying all men from Saudi Arabia are two faced, arrogant, ego-selfish, liars, and cowards to their religion. Not saying that at all. No stereotypes here.
I'm sure they're not all bad, but lets just start with one.

Let's start with one who is handsome by nature. Naturally tanned skin, dark brown eyes, black hair. Has the ability to cook amazing food, speaks two languages, is charming at first sight and loves children.
Who doesn't love a man who loves to cook and loves children? And who is also amazingly handsome at the same time. Sounds like a dream come true. . . NOT.

You know, people warned me against dating men from the Middle East, and especially from Saudi Arabia. But of course I said, "No way guys. This one is different."
Hahaha. Sure. What the hell was I thinking?

Here's a small review about Saudi Arabia and Saudi Men:
- Women do not hold the 'right' to drive cars in this country
- Islam is the leading religion. This is a seriously religious country. I don't mean kind of serious like Italy, where people may make strange faces at your back if you wear shorts in the summer time. I mean Saudi Arabia religious police, if you are not praying at prayer time you will be killed, kind of serious.
- Men and women are to be separated at all time. This includes education, hospitals, public, malls, streets, banks, grocery stores... The phrase, "I've known her since we were kids. It doesn't matter that I'm a guy and shes a girl, we've been best friends forever," DOES NOT EXIST!
- Its the opposite of the Western world. Women wear a particular type of clothing which is meant to "hide" them from the eyes of other men.
.... I am sure I sound a bit biased here. SORRY IF YOU ARE SAUDI and reading this page. I suggest you stop here. It's only going to get worse.

Lets be clear. Its NOT a Muslim thing. I have many Muslim friends. I like the religion. I like the people. What I do not like is the Saudi Arabian culture itself. That is not to say that all Muslim's are bad. NOT TRUE. All Saudi's are BAD, NOT TRUE.

But, this story is mine. About my experience with Saudi Arabia.
I have never been to Saudi. I don't know if I can ever go.
It doesn't boil down to the fact that Saudi is a bad country. I've never been there and I do not know.
Saudi people aren't bad people. I've met a handful of great ones!
But I have also had a terrible experience with one.
So, If I see a Saudi, I will not be rude. I will not judge. I will not discriminate.
I will keep a distance at first. I will remember my experience and keep it close to me. And I will never forget how I felt and how I will never allow myself to feel that low again.

Engaging in a relationship with a Saudi Arabian man was like nothing I could have expected. It was a bad choice on my part. I was surrounded with friends who repeatedly told me, "You know we love you, we don't want to see you hurt. So, we suggest you stay away from Saudi's. We all have had bad experiences with them. That's not to say they are all bad, he could be a good one, but we just don't want you to be hurt in the end."

I could never understand that sentence. I had no idea what they were talking on about. The Saudi people I met were awesome! How could my friends think Saudi people were so terrible? They talked about Saudi men using women for sex, having more than one personality depending on the situation and a million other things that are just so complicated.
Its simple: Saudi Arabian's are complicated. And that goes back to their religion.

But just because they have a strict religion, does that give them the right to be cruel ?
Just because they came from Saudi Arabia as International Students, does that give them the right to treat American women as Saudi women?
Those are fine lines I don't have answers to.
I try my best to understand why these things happened and what I could have done differently.
But its not a problem with me. Its a problem with the individual Saudi man I had a relationship with. As much as I try to understand, I just cannot.

There is no more "understanding" from me. I'm just going to lay down the facts of what happened and how it made me feel (and why I will never date a Saudi man again).

1st Month
The first month was like a honeymoon stage. It was wonderful! He was so sweet! He treated me so kindly!
He talked to my mom on Skype and invited her over for dinner. He cooked a nice dinner for my grandmother and mother. He was so sweet to them. I loved him for being so good to my family! He loved kids. He always had pictures of himself with kids of his teacher or friends. He was great to my friends! His home was open for me to come when ever I wanted. Its as if he made me like a part of his small family in Canada. He was the perfect boyfried.

2nd Month
The second month was just as great. I spent my summer in Europe and we agreed to stay in touch and work it out because we liked each other so much. So, we talked on Skype and Facebook almost everyday. He was such a sweet heart. We would Skype for hours at a time. I remember staying awake until 5 am with him.
We talked all of the time and I felt just as close to him when I was abroad.

3rd  and 4th Month
The third month was more difficult. I was traveling around more and had less access to a computer. And things started to bother me more by this point. It was affecting my well-being, my happiness.
The things that effected me were small scale. But to me, small things mean more than big things.
When I am in a relationship, it is necessary for a man to tell me when I look good, that he likes .... about me, he likes .... on me, he likes my hair ... like this, my eyes ... like that and so on. Compliments are key. Its just common sense. Or so I thought.

I didn't push him... Until I saw something on Facebook that really hurt my feelings.
He wrote, "Wow! Leslie! Looking gorgeous as always!"
My name is not Leslie. This broke my heart. The girl in the picture was slim, long hair, fit and gorgeous, to say the least.
That made me feel like I was nothing to him. I know knew that he had the vocabulary to say sweet things, he just didn't want to say them to me.
This attacked my self esteem because I believed him.

I asked him why he posted that comment and he got mad at me for caring and said, "Its not a big deal. It doesn't even matter. She is my teacher."


At the time, I accepted "I do not know." However, it made me feel as if he did not think I was pretty, beautiful, attractive. The only thing he said to me was, "You have a nice smile."
Nothing more. Ever.

That was when it all started.

I looked at my ability to say how I feel as a strength. I think he saw it as a weakness.

I think that is when the self-esteem burning started.

I remember he once told me he talked to his ex girlfriend on Skype. I said that's great and I respected him for telling me the truth.
He then went on to say the words she spoke, "I miss you. I think about you all of the time. I always dream about you."

This hurt my feelings even more.
I mean, I have encounters with my ex boyfriends but they mean nothing and I never bring it into the relationship because I thought it was unimportant.

Finally, we were back on the same continent at the same time:

I had just come home and we were in my bedroom and I was showing him a popular Korean song, "Gangnam Style"
He said about a woman in the video, "Wow. She is beautiful."
--- So. Let me get this straight. You say this infront of me to someone else, but you don't say this to my face?

There was another incident when we were sitting on his bed, just two days after. There was a small white teddy bear on his dresser and he said to me, "Do you know where I got that?"
Obviously I didn't. So, I replied with, "no."

He looked at the teddy bear and said, "I got it from my first girlfriend in Canada. :) "
That's sweet.
I asked, "That's nice. Why did you tell me that?"
His reply, "Well, whenever I see the teddy, i think of her. I can't helpg it. I really miss her."
Honest. But equally just as painful and unnecessary.

This guy screwed my self esteem. Completely. He made me feel less and less each time he made a negative comment to me or indirectly.

I feel like my relationship is over. But I still have to deal with the shit I felt from him.
There is no easy way to break it down and understand it. What I think is that the country he comes from has a reputation for treating women as less than women, as less than animals, they are at the bottom of the chain. In Western culture, women are high on the chain. We have our independence  we are able to drive, work in "manly" fields like mechanics or engineers, and we have the right to say what we feel or what we think. We have the right.

And I feel like he wanted to take my rights from me and make me feel less of a person, less of a woman.
When someone attacks your self of steem, it takes months or even years to repair the small damage done.
Sometimes I feel like saying I hate him for the way he made me feel.
I once heard, "Saudi's are nice people to be friends with, but not to date."
And I couldn't agree to that more.